Be the first to review this product

Naan is a light flatbread that originated in India. It’s baked in the traditional way against the side of a tandoor oven before being coated with ghee (clarified butter). In classic Indian cooking, naan is used to scoop up or mop up dishes such as curries.

In Mediterranean cooking, naan is often served as a side dish or appetiser with the most delicious dipping sauces, spreads and deli foods. You can enjoy naan without worrying – it contains no sugar or other unnecessary ingredients. Yummy, pure and ready to serve in minutes.

Recipe for naan with grilled vegetables and pesto 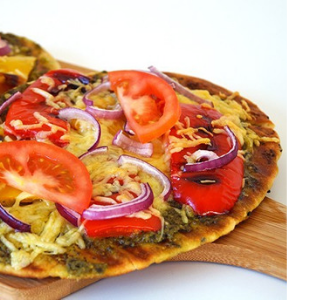 Preheat the oven to 200°C. Cut the aubergine in half lengthwise, then cut each half into slices. Chop the red and yellow peppers into chunks. Grill the aubergine and peppers for around 8–10 minutes.

Slice the red onion into half-rings and slice the tomato. Spread the pesto over the naan. Place the grilled aubergine and red and yellow peppers on top. Finish with the onion and garnish with grated cheese. Place in the oven for approximately 10 minutes (preferably under the grill), until the cheese has melted. Garnish with fresh tomato.

FREE SHIPPING FROM € 59,95
For all shipments in NL and BE

MONEY BACK GUARANTEE
60 days ‘'not satisfied, money back'’